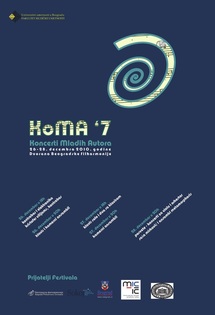 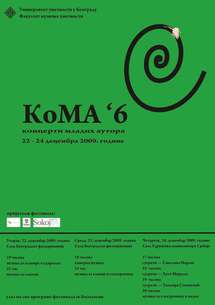 KoMA (KOncerti Mladih Autora / Young Authors’ Concerts) is a project initiated in 2004 and developed by a group of composition students of Faculty of Music, Belgrade, representing an attempt to promote new music of the youngest generation of composers. The esthetic position of the Festival - combining inherited classical tradition with some popular music genres, new technologies and performative practices, serves both as a response to leading trends in European new music scene and as a way to attract younger audiences to concert venues.


After its initial success, KoMA became an annual event held in December. The Festival is supported by FoM Belgrade, Republic of Serbia Ministry of Culture, City of Belgrade Secretariat for Culture and SOKOJ.


Founders and curators of first editions of KoMA were two young composers, Ana Gnjatović and Milica Đorđević, at the time undergraduate students of FoM Belgrade. In 2007, Milica continues her studies outside of Serbia, and Ana remains the curator of KoMA, with a lot of help from her friends, colleagues, professors and FoM staff.

Yet another highlight of autumn 2009 was, in its entirety, the VIth Season of the so-called ‘KoMA 6’ festival of young composers, most of them still students, with many excellent young performers, pianists, percussionists, string players and the Ensemble ‘Ljubica Marić’ with its conductor Rade Pejčić. Maybe the best pieces we heard this time were: the Poème for piano duo and percussionists by Marko Marić (b. 1987), a brilliant pianist himself (‘the Bartók of the 21st century’ in my view); Version for seven amplified instruments by Svetlana Maraš (b. 1985); and a rarity, a piece by Dragan Latinčić, Sheitan’s fingering for two violas (impressively played by B. Brezovac and S. Mirković).
Donata Premeru, Tempo -  A Quarterly Review of Modern Music, Vol 64 No 253 July 2010